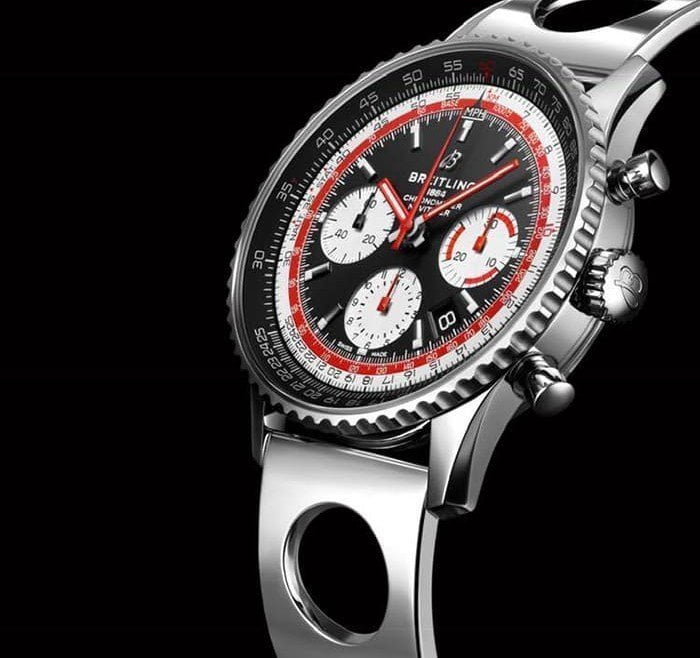 Of course, the year 2019 is still quite young, but the first interesting news was not long in coming. Especially since the big watch fairs are pending again. As we all know, for now, it starts with the SIHH 2019 in Geneva (14-17 January), followed by Baselworld 2019 (21-26 March) in March. Nevertheless, there is always plenty of news from various watch brands around all these fairs and it does not really matter if the respective manufacturers are exhibiting there or not.

We are just using the time before and in between for some presentation work. But, now we will start with Breitling. Yet, one of the Breitling’s premiere is Breitling and Aviation. As we all know this theme carries on a long history and in some way belong together.

In 2017, Georges Kern was appointed the new CEO of the independent watch company Breitling SA, where he is also a shareholder. The former IWC Gentleman changed a lot the Swiss watch brand. He was CEO of IWC from 2002 to 2016, repositioning the brand to become one of the most successful and respected Swiss watch Maisons. Nevertheless, the “Gem” of all cute fans of Breitling is great. On the other hand, from the beginning, his promising approach was very interesting – A fresh Wind at Breitling.

We, at MajordÓr, are Big Breitling funs and maybe we are also a little biased regarding this brand. As a matter of fact, these Breitling new models appeal not only to the typical Breitling fans, which is good, in our opinion.  Moreover, Mr. Kern seems to have a strong boldness for watches which are quite rooted in the design of the ’90s and 2000s. Perhaps this is the right way for a modern watch brand.

But returning to the New Breitling Navitimer models from the 1950s that bear the names and logos of the former Iconic Air Companies – Swissair (discontinued in 2002), Pan Am (interrupted in 1991) and TWA ( existed from 1930 until 2001 )

“Nevertheless, Breitling played an important role in the golden era of aviation, helping crews track the full range of calculations related to navigation. The brand has now created a capsule collection of Navitimer 1 Airline Editions that commemorate the most emblematic airlines of that time. The collection is being launched, appropriately, with the Navitimer 1 B01 Chronograph 43 Swissair Edition, which will be followed by timepieces celebrating other important airlines of a very special era. Breitling’s first capsule collection captures the spirit of a memorable time for the commercial flight and revives the cool and evocative style of the 1960s and 1970s. The Navitimer 1 Airline Editions pay an affectionate tribute to the pioneers of civil aviation and celebrate the most emblematic airlines of the era, starting with Swissair.”

In fact, when Breitling launched Navitimer wrist chronograph in 1952, it became an instant favorite with aviators and also with the dashing pilots of the late 1950s. At that time, all these pilots flew their iconic passenger aircraft, such as the Boeing 707 and the Douglas DC-8, across countries or on intercontinental flights. Thus, Breitling Navitimer featured a circular slide rule which allowed the pilots to make any critical calculations they might need in the air. Nevertheless, in those glory days of commercial aviation, the Navitimer chronographs were the original wrist-worn onboard computers and ultimately established Breitling – already highly regarded for its onboard chronographs – as the unrivaled official supplier to the world of aviation.

“For civil aviation history lovers and watch aficionados, the very mention of these legendary carriers calls to mind the excitement and adventure associated with long-haul flights. For a more fashion-oriented clientele, there’s the allure of the style of a time captured in classic movie scenes of passengers enjoying the premium service provided by smiling, colorfully uniformed crew members. Breitling was the preferred supplier of more than 15 leading companies and aircraft manufacturers back in the 1960s, and, with our first capsule collection, we are really excited about commemorating the most emblematic airlines of that era, starting with Swissair.” 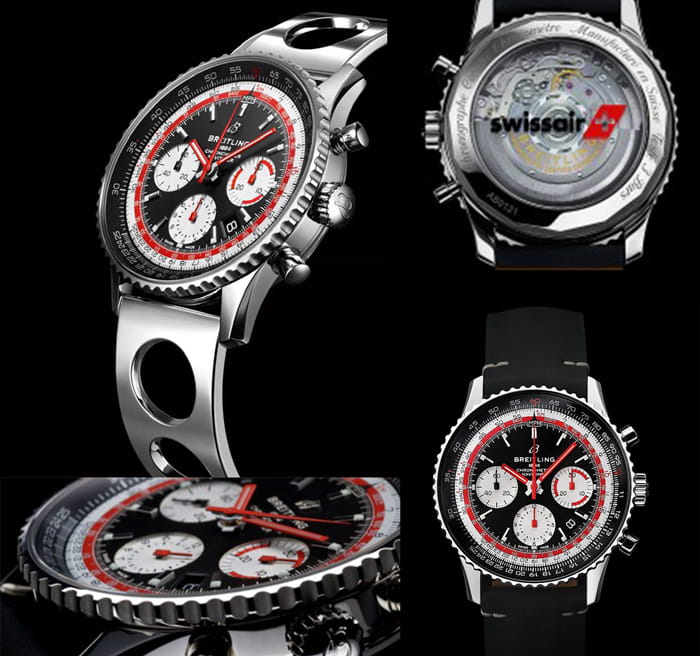 “The Navitimer 1 B01 Chronograph 43 Swissair Edition features a transparent sapphire caseback with a printed Swissair logo. Its 43-millimeter stainless-steel case is presented with a black dial, silver subdials, and a vintage-inspired black leather strap or a stainless steel mesh bracelet. The chronograph celebrates the former national airline of Breitling’s home country, and will soon be joined by other fine watches honoring iconic carriers whose names are also synonymous with the golden age of commercial flight. Plane spotters should keep their eyes open for another legendary airliner scheduled to depart shortly! ” 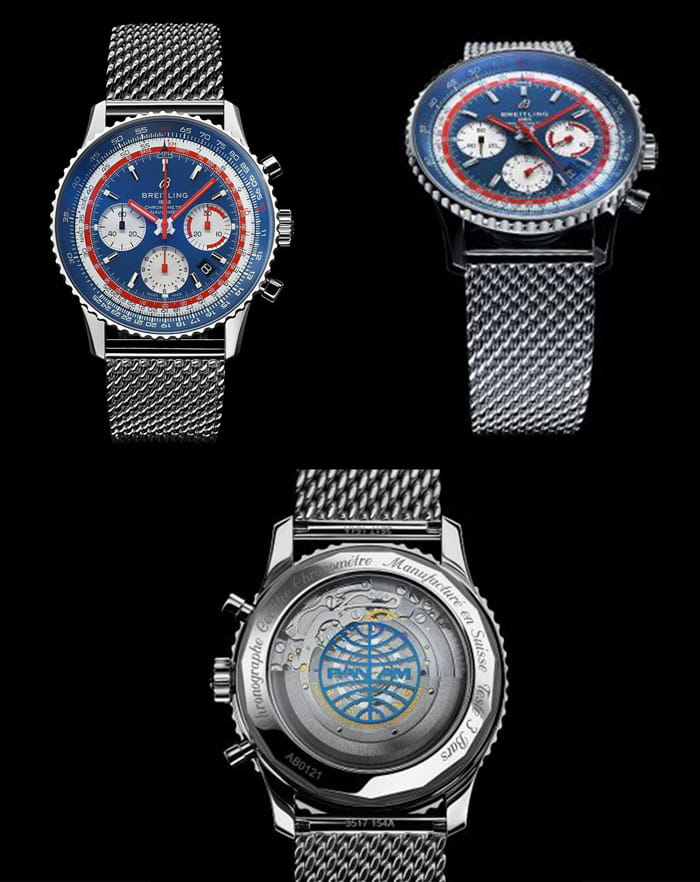 “Breitling recently launched its first capsule collection – the Navitimer 1 Airline Editions. Nevertheless, Breitling celebrates the brand’s important role in the golden era of aviation. And also some of the most emblematic airlines companies of that time. The collection took off with Swissair, the former national airline of Breitling’s home country. The second member of the collection honors a true American legend, Pan Am. “

“The officially licensed Navitimer 1 B01 Chronograph 43 Pan Am Edition is distinguished by one of the most recognizable logos in the history of aviation printed on its transparent sapphire caseback. For decades, Pan American World Airways was a dominant force in commercial aviation. Although, long after the airline ceased operations, it is still closely linked with the excitement of air travel. The Pan Am Edition has a stainless-steel case with a blue dial, silver subdials, and a vintage-inspired brown leather strap, a Breitling Air Racer bracelet, or a stainless-steel mesh bracelet. The Pan Am Edition is the second member of Breitling’s capsule collection, joining Swissair. Keep an eye out for another legendary airline that will be taking off shortly! “ 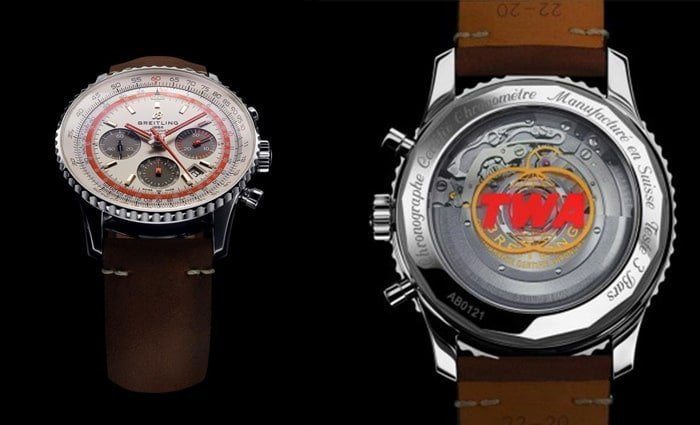 “The Navitimer 1  B01 Chronograph 43  TWA  Edition has a transparent sapphire caseback with the TWA logo printed on it. Trans World Airlines, was based in the United States. Nevertheless at its time was a familiar sight at the world’s major airports throughout most of the twentieth century. Although, this stainless-steel watch possesses a silver dial, anthracite subdials, and a vintage-inspired brown leather strap. It comes also with a stainless steel mesh bracelet. And, like the other editions in the capsule collection, it commemorates that airline company which played an important role in the emergence of commercial flight. Although, TWA,  in the twentieth century, become responsible for introducing passenger aviation as we know it today.” 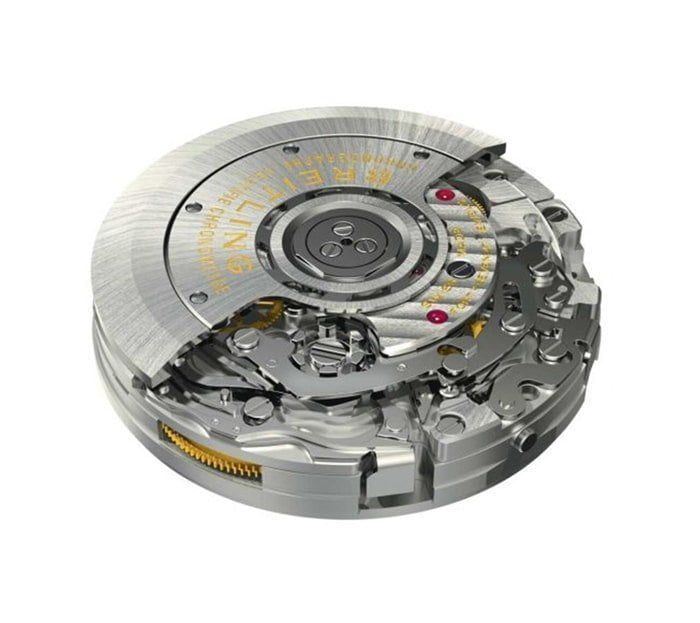 Correspondingly, the Breitling Navitimer 1 Airline Edition watches comes powered by in-house mechanical chronograph movement – the Breitling Manufacture Caliber 01. In fact,  this movement has been acclaimed as one of the world’s finest mechanical watch mechanisms. Moreover, it delivers a remarkable precision and also a power reserve of approximately 70 hours. Notably, also for all models, the bidirectional rotating bezel fits with the famous circular slide rule. In fact, the side rule serves to perform the entire range of calculations relating to airborne navigation. Not to mention that their distinctive straight hands give the watches a dynamic, contemporary interpretation of a classic look. This first Breitling capsule collection will be available from April 2019 at Breitling boutiques and official retailers. But just for a limited period of time.

In fact, this first Breitling capsule collection will be available from April 2019 at Breitling boutiques and official retailers for a limited period of time.

The price range of these watches varies around $8.000. Of course, we will come back with more information about the price range and also with models availability.