This watch is Guaranteed Authentic and comes with a Certificate of Authenticity, Manufacturer Serial Numbers, Original Box, and Instructions manual. 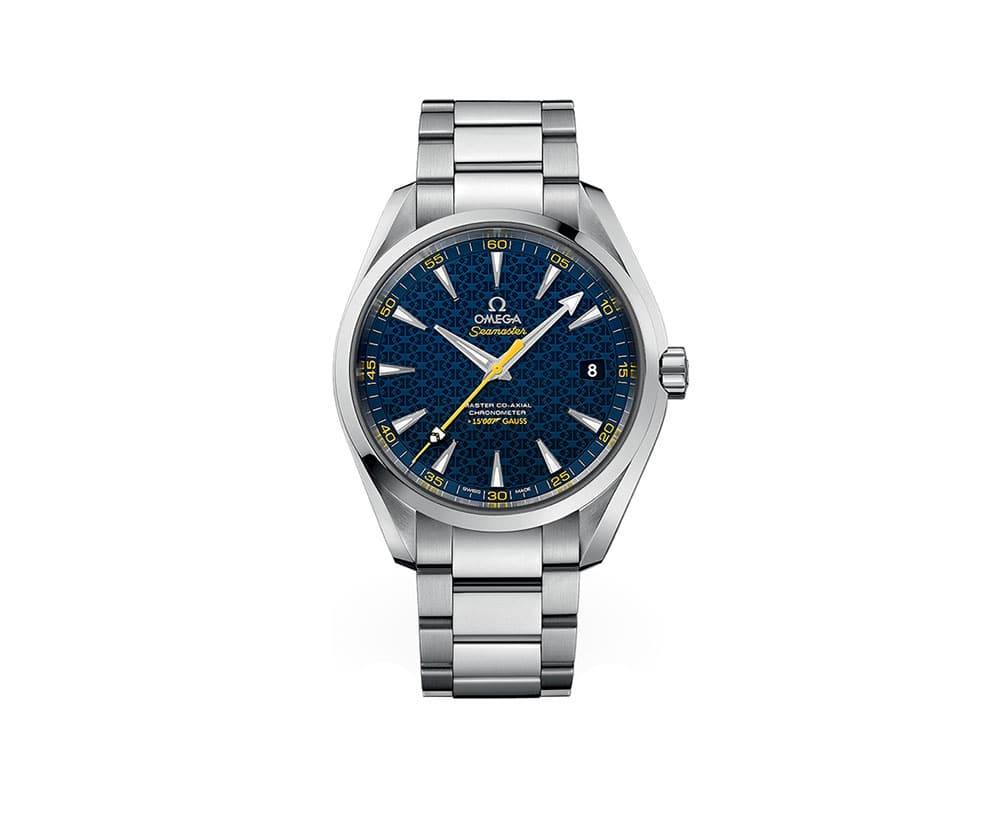 In the first place, this watch presents itself as a classic yet robust timepiece which represents a tribute to OMEGA’s rich maritime heritage. Thus, with its dramatic and easily-recognizable dial design of the OMEGA Seamaster Aqua Terra 150M collection recalls the wooden decks of luxury sailboats. Although, the stainless steel 41.5 mm case is presented on a stainless steel bracelet. In fact, this certified chronometer is powered by the OMEGA Master Co-Axial caliber 8500 and also resistant to magnetic fields greater than 15,000 gauss. Of course, its transparent case-back makes visible the watch mechanism.

OMEGA created the  JAMES BOND SPECTRE, limited edition Seamaster Aqua Terra 150M with a Blue Dial and a stainless steel case diameter of the 41.5mm. Moreover, its stainless steel case features the Bond family coat of arms in a repeatedly interlocked pattern. But, the symbol is also found near the tip of the second hand.

Of course, this is a self‑winding movement with Co‑Axial escapement. Moreover, it possesses a silicon balance‑spring on free sprung‑balance, 2 barrels mounted in series, and also winds automatically in both directions. Moreover, comes with a rhodium‑plated balance bridge and also an oscillating mass. Although, possesses also a fine luxury finish with exclusive Geneva waves in arabesque.

Moreover, the movement features Omega’s “Si 14” silicon balance spring, which contributes to the movements outstanding resistance to shock and to environmental disturbances and thus to the watch’s chronometric performance. Also, this movement features Omegas Co-Axial Escapement which contributes to greater precision, stability and durability. As a matter of fact, the Co-Axial escapement produces less friction and also reduces the necessity of lubrication thus reducing the time intervals required between servicing.

In fact, Omega is a registered trademark of Omega SA. Thus, Majordor is not yet an authorized dealer for Omega and also in NO WAY affiliated with Omega SA or Omega USA. Equally important, all Omega watches sold through Majordor are New, Original and also delivered in UNWORN condition.