Delivery: Usually this watch is shipped within 2 to 7 days 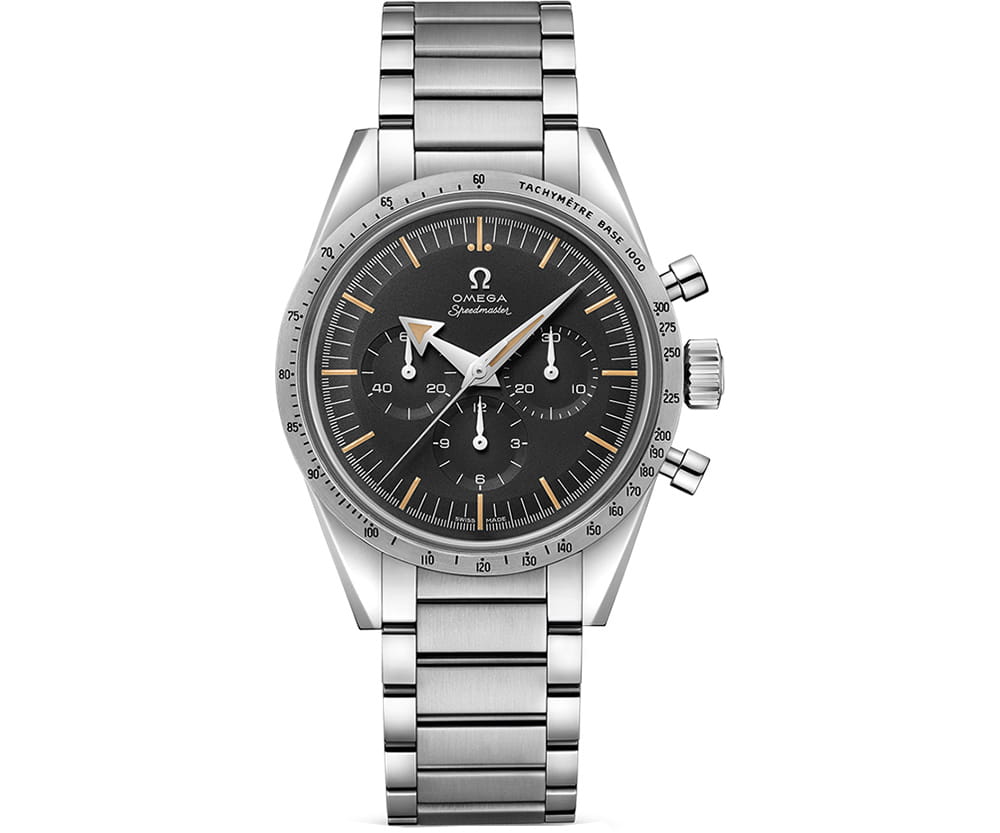 Back in 1957, Omega released three professional timepieces which become absolutely classical. The Seamaster 300, the Railmaster and also the Speedmaster. As a result, nowadays all these watches become collectible watches. Of course, a lot of collectors are still looking after them. Later on, in 2017, OMEGA decided to pay tribute to all these three mechanical masterpieces. And finally, they released a Special 60th Anniversary Editions of each model. So, Omega 1957 Trilogy “Speedmaster ’57” Limited Edition comes beeing part of this collection.

Moreover, this 60th Anniversary Collection pays tribute to one of three classic timepieces released in 1957. Also, this 1957 Trilogy Speedmaster 57 from Omega comes with Limited Edition of 3,557 pieces. But, at that time, this Speedmaster 57 watch become the first chronograph wristwatch in the world. And that’s because of its tachymeter scale on the bezel as opposed to printed on the dial. Of course, these 2017 Omega 1957 Speedmaster 57 model matches perfectly each feature of the original watch and also stays true to the Omega Speedmaster’s iconic spirit.

So, what do all these three watches in the Trilogy possess in common?  In the first place, their brushed and also polished stainless steel case which features a black ‘tropical’ dial, with vintage indexes filled with Super-LumiNova. But, the updated stainless steel bracelet features also a retro-style OMEGA logo on the clasp. Also, these watches come powered by OMEGA Caliber 1861.

Nevertheless, this Speedmaster 57 Trilogy Chronograph watch is Brand New and Guaranteed Authentic. Not to mention also that it is coming with Manufacturer Serial Numbers. Moreover, this watch comes also with its Original Certificate of Authenticity, Manufacturer Box and, Instruction Manual.

Overall, all Omega 1957 Trilogy Speedmaster 57 watches prices are subject to change without notice and we ( Majordor ) reserve the right to make changes as necessary to reflect the market conditions, our supplier’s conditions and all other factors which are not under our direct control. Moreover, the retail prices shown above may represent the current replacement value of the item and are suggested as retail prices, which may not reflect the selling prices. Also, the prices do not contain Shipping and Insurance. Thus, prices can also vary according to the currency exchange rates and may be different than in the store. So, please check up your country and currencies for delivery.

In fact, Omega is a registered trademark of Omega SA. Thus, Majordor is not yet an authorized dealer for Omega and also in NO WAY affiliated with Omega SA or USA. Equally important, all watches sold through Majordor are New, Original and also delivered in UNWORN condition.