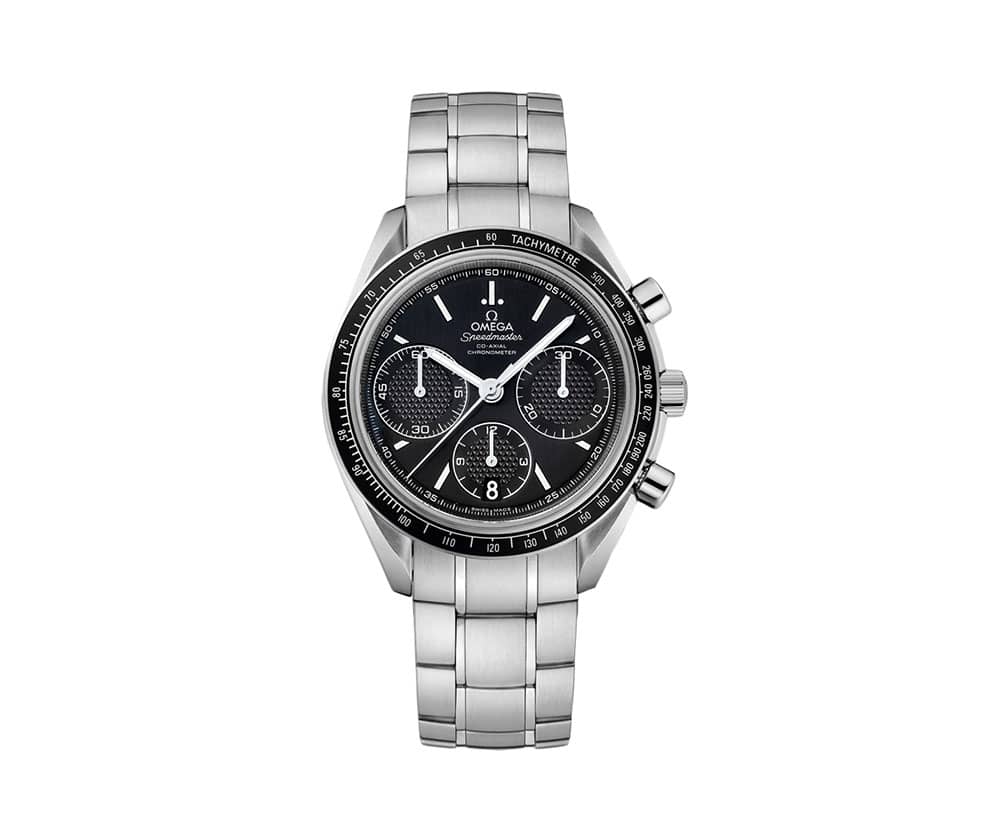 Although, the Speedmaster Racing honors the Omega chronograph’s long connection to motor racing. Before the Speedmaster was worn on the Moon and also at the North or South Poles, it was found on the wrists of men and women driving high performance automobiles.

The Omega’s Speedmaster Racing movement features also an Omega’s “Si 14” silicon balance spring. Although, this spring contributes also to the movement’s outstanding resistance to shock and environmental disturbances. Thus, improves the watch’s chronometric performance. Although, it features the now standard Co Axial Escapement. This escapement contributes to greater precision, stability and also durability. The Omega Speedmaster Co Axial escapement has less friction and also reduces the necessity of lubrication. Thus it reduces the time required between servicing. In fact, the SI 14 balance spring coupled with the Co-Axial escapement makes an extremely reliable and also stable movement.

6 Years Warranty Included. Or you can also choose for an extended warranty program.

Nevertheless, this Speedmaster Racing Chronograph watch is Brand New and Guaranteed Authentic. Not to mention also that it is coming with Manufacturer Serial Numbers. Moreover, this watch comes also with its Original Certificate of Authenticity, Manufacturer Box and, Instruction Manual.

All Omega Speedmaster Racing watches prices can be changed without notice. We (Majordor), also reserve the right to make changes as necessary. These changes may also reflect the market conditions. As well as supplier conditions, and all other factors that are not under our direct control. Moreover, the retail prices represent the actual replacement value of the item. The prices are suggested also as retail prices. These prices may also not reflect sales prices. Also, prices do not include transportation and insurance. Prices may also vary depending on the exchange rate. Also may be different than in the store. Please check the country and also your currencies for delivery. Check also our payment terms and acceptance here.

In fact, Omega is a registered trademark of Omega SA. Thus, Majordor is not yet an authorized dealer for Omega and also in NO WAY affiliated with Omega SA or USA. Equally important, all watches sold through Majordor are delivered in UNWORN condition.