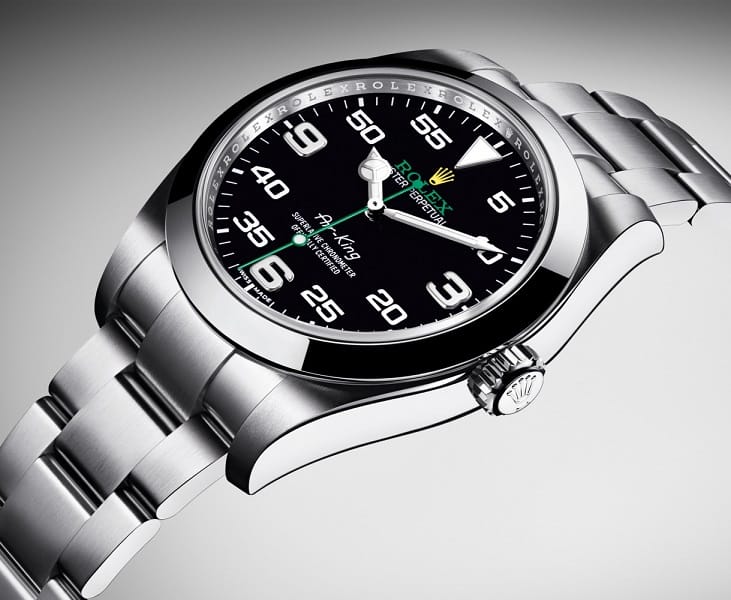 The Rolex Air-King – One of the longest-running production models within Rolex’s modern lineup, with only the iconic Datejust and the original Oyster Perpetual rivaling it for longevity.

The Air-King, like the Datejust, was first released in 1945 as part of a larger collection of “Air” models meant to honor the British Royal Air Force for their service during the 1930s and ‘40s — a collection that also included an Air-Lion, Air-Tiger, and Air-Giant.

While the Air-King (pictured above) outlasted its three fellow “Air” watches, it was not until 1953, with the “transitional” Ref. 6552 model, and then in 1957, with the appearance of the Air-King Ref. 5500, that the model acquired its familiar modern aesthetic.

Since then, the Air-King has been positioned as one of the more affordable options within the Rolex portfolio, and— after being briefly discontinued in 2014— was resurrected in 2016 as the Ref. 116900 (below).

On the black dial are applied white-gold numerals, with traditional 3, 6, and 9 Arabic numerals for the quarter-hour marks, and the remaining numerals increasing by increments of five in a look reminiscent of the navigational tools of airplanes; at the 12 o’clock position is an applied triangular hour marker commonly found on many pilots’ watches.

Below, you’ll notice the printed Rolex logo, with accents in gold and Rolex green, and a printed, vintage Air-King logo toward the bottom of the dial. Indicating the time is Rolex’s signature “Mercedes” hour hand and a sword-style minute hand, with another Rolex green-accented lollipop hand displaying the running seconds.

The Air-King uses the automatic Rolex Caliber 3131, the same movement currently used for the Rolex Milgauss, which stores a 48-hour power reserve. The watch is available at retailers worldwide, with the brand currently pricing it at $6,200.

Comparing the modern watch to its vintage counterparts, there are a few noticeable similarities. These include the general shape of the of the Oyster case — a style seen on almost all Rolex watches since the middle of the 20th century — and, similarly along these lines, also the Oyster bracelet.

Specific to both the vintage and contemporary Air-King models are two primary details: the vintage Air-King logo established in the early iterations of the piece, and the quarter-hour numeral markers for the 3, 6, and 9 o’clock positions.

While these numerals are not exactly in the same style as those on early Air-Kings — firstly, because most vintage models of the piece predominantly featured tick marks, diamonds, or some other stylized non-numerical hour markers; secondly, because the font and sizing are a bit more rounded and proportionally enlarged to the modern dial — the heritage of the watch is still recognizable.

Among the differences between the historical and modern watches, many are easily noticeable. These include the enlarged, 40-mm case, as compared to the vintage model’s 34-or-so-mm; the addition of the non-quarter-hour numerals and the triangle at the 12 o’clock mark; and other details such as the choice of hands and the green colored highlights. There’s no mistaking the contemporary Air-King as a modern Rolex creation rather than a direct historical homage. In my view, the modern Air-King seems more a descendant of the Rolex Explorer (vintage model pictured below), especially with its dial layout and choice of hands (which may partially be a result of Rolex sharing manufacturing between the two models, but that is, of course, a subject however this is for another article).

Comparing today’s Air-King to the historical models in the series, especially from References 6552 and 5500 onward, it’s clear that Rolex did not set out to build a direct replica of anyone watch. However, there are some interesting homages within the choice of numerals, and even more subtly within the coloring and hour markers. While the greens and gold of this reference are not seen in any vintage Air-King pieces, as far as I am aware, they do call forth the traditional colors of the brand, used historically on advertisements and packaging and also used directly on some dials. Additionally, the hour markers — with the rising increments of five and the triangular marker at midnight— do work to channel the heritage of vintage pilot’s watches, even if these features haven’t been seen in vintage models of the Air-King series.

Rolex has done what it tends to do in the modern era for its watches with historical lineages: leave enough clear details to maintain a piece within the framework of its series, while changing enough to push the style forward for modern consumers.

As with many Rolex timepieces, myself and other collectors would like to see a more direct homage by the brand.

Until this unlikely event, check out this vintage-style advertisement I found through the brand’s Instagram, below. The £45 option, adjusted for inflation, is about $1,300, in case you’re curious.

This article was first published in Watch Time Magazine by Caleb Anderson : Vintage Eye for the Modern Guy: Rolex Air-King