This watch is Guaranteed Authentic and comes with a Certificate of Authenticity, Manufacturer Serial Numbers, Original Box, and Instructions Manual. 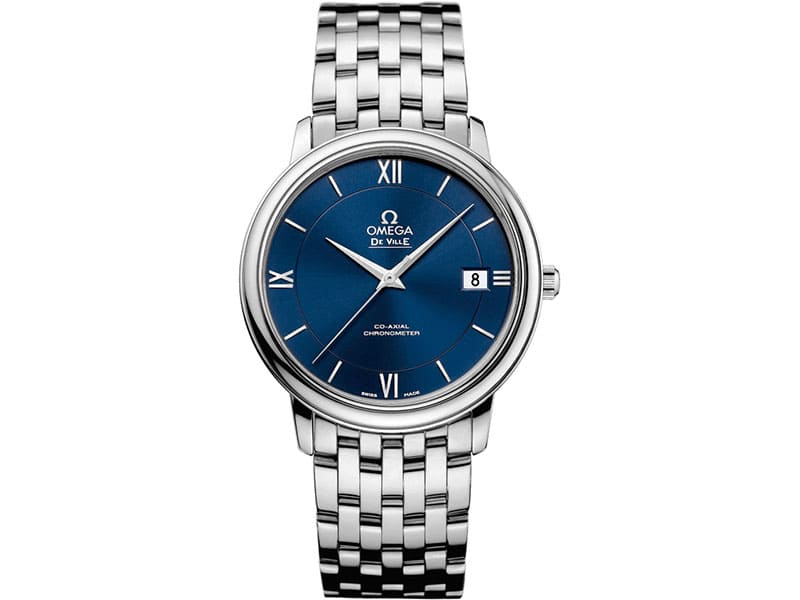 As a matter of fact, Omega Launched the De Ville series around 1960 as part of the larger Seamaster series of watches. For that time, this represented the continuation of the classic dress watch heritage the Omega Seamaster embodied since 1948. But, that becomes less important since the launch of the first dive watch in the series in 1957.

Moreover, in 1967 the De Ville collection became independent of the Seamaster line and began to develop its own individual charm and heritage. Nevertheless, OMEGA De Ville Prestige collection has attracted a large and loyal following with its classic, elegant design. These timepieces are characterized by pure styling with luxury finishes and exude a timeless design. This model features an impressive two-zone champagne dial with diamond-set indexes and gold-fashioned Roman numerals at the 3, 6, 9 and 12 o’clock positions.

In fact, this represents Omega’s co-axial version of the ETA 2892-A2. Thus, a Self-winding chronometer, Co-Axial escapement movement with rhodium-plated finish.

Nevertheless, all prices are subject to change without notice and we ( Majordor ) reserve the right to make changes as necessary to reflect the market conditions, our supplier’s conditions and all other factors which are not under our direct control. Moreover, the retail prices shown above may represent the current replacement value of the item and are suggested as retail price, which may not reflect the selling prices. Thus, prices can vary according to the currency exchange rates and may be different than in the store. So, please check up your country and currencies for delivery. Yet, Omega is a registered trademark of Omega SA.  In fact, Majordor is not an authorized dealer for Omega and also in NO WAY affiliated with Omega SA or Omega USA. Equally important, all Omega watches sold through Majordor are delivered in UNWORN condition.