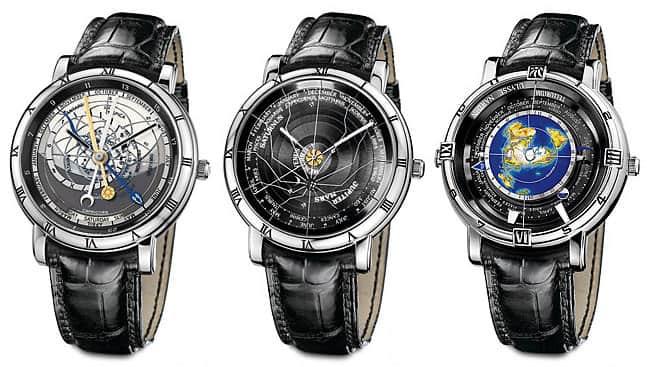 Ulysse Nardin founded the company in 1846, in the Swiss town Le Locle – west of La Chaux-de-Fonds in the Canton of Neuchâtel- one of the most important places, where both business and technology of watchmaking developed together over the years.

He got his first training in the art of watchmaking from his father, Leonard-Frederic Nardin. Thereafter he developed his skills in watchmaking studying and working together with very known masters of that time – Frederic William Dubois and Louis JeanRichard-dit-Bressel.

Soon after he established his company, Ulysse Nardin wishing to gain its own renown regarding the production of marine chronometers started to manufacture its own watches. At that time, because of their high demand, it was a good business manufacturing this kind of big clocks placed in wooden boxes. Moreover, at that time, in almost all seafaring countries, ship navigation depended entirely upon precision timepieces on their boards. 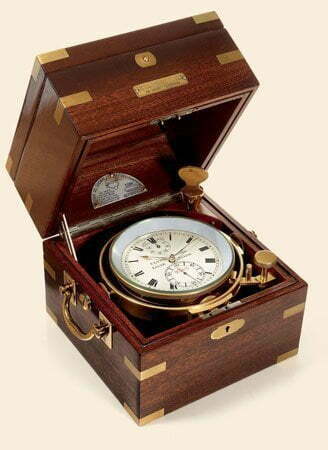 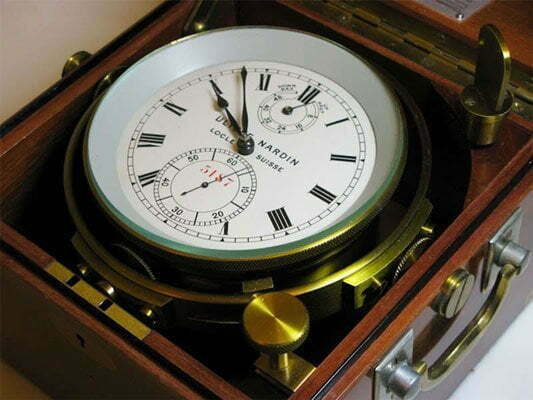 There was a story regarding these watches: If anyone wanted to become a ship captain it was mandatory to own a Ulysse Nardin Watch before to start training as a captain.

In the mid-1880, the minute repeaters, highly complicated watches and also many pocket chronometers bear the reputation of the Le Locle watchmakers around the world.

Thus, in 1860 Ulysse Nardin acquires a high-precision astronomical regulator – constructed by the “father of Swiss watchmaking” Jacques-Frédéric Houriet – to calibrate his pocket chronometers.

In the same year, the company moves to its new premises – Nr.3, Rue Jardin, Le Locle, Switzerland – where even today is still making precision watches.

Unfortunately, Ulysse Nardin dies at age 53 in 1876. Not long after his death, his son – Paul-David Nardin – takes over as head of the company and within 2 years, the company won a Gold Medal at the Paris Universal Exhibition for its pocket marine chronometers.

In 1890, Ulysse Nardin Watches receives two Swiss patents and get awarded once again for one of its patents – a chronometer mechanism which enables daily winding without reversing the bowl.

By the year 1900, Paul-David Nardin possessed already nine pocket chronometers with tourbillon escapements for improving accuracy. The number of employees in 1900 reached an impressive number of 300.

Ulysse Nardin acquired a high reputation mainly by the manufacturing of Marine Chronometers. (Today the anchor in the company logo reminds us this.)

Furthermore, pocket watches with complications such as moon phase, perpetual calendar, repetition, and watches with alarm function were also produced.

Till 1904, Ulysse Nardin supplied with its marine chronometers both the Russian and the Japanese Admiralties. But, following the Russo-Japanese War, the Imperial Government of Japan increases its orders and becomes one of the company’s principal customers. 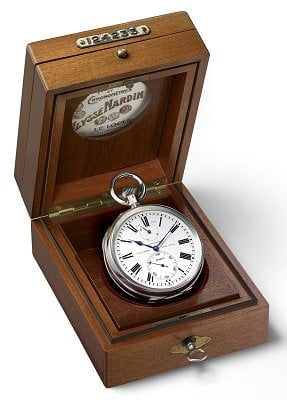 In 1911, Paul-David Nardin takes out his third Swiss patent (No. 54714) for a perfected control mechanism of the chronographic timing-wheel to eliminate almost imperceptible leaps.

Additionally, in 1916 Ulysse Nardin produces a new and smaller 13″ movement, perfect for pocket or wristwatches.

In 1975, Neuchâtel Observatory releases its last official publication regarding chronometer performance from 1846 to 1975.

According to this report, Ulysse Nardin obtained 4324 certificates of performance for mechanical marine chronometers out of a total of 4504 awarded (95%).

In 1983, Rolf W. Schnyder take over the company. The “tide” had taken almost everything with it except a sonorous name. Schnyder himself knew little about watchmaking.

“I was on holiday skiing when I read in the papers that Ulysse Nardin had filed for Chapter 11 (deferment of payment) to protect itself from creditors. This was during the Quartz Crisis and many famous companies in Switzerland were folding. Ulysse Nardin had many debts without any real way of paying them off,” says Schnyder. He, like many watch enthusiasts, knew Ulysse Nardin’s name well. “I knew of the brand because of the many medals for accuracy and chronometric competitions that it had won. I was immediately interested in purchasing Ulysse Nardin. It was the opportunity to be involved in one of the truly great names in horology.”

Despite this, the man with the unconventional ideas led the washed-up company to new heights.  Finally, Schnyder finds Prof. Dr. Ludwig Oechslin the ideal collaborator to aid in “fishing the company out of the water”.  Prof. Dr. Ludwig Oechslin – scientist, watchmaker, inventor, and historian – specialty was astronomic timepieces – he learned not only from the complicated mechanics of heavenly models but from the cosmos in which we all exist as well.

ULYSSE NARDIN – THE TRILOGY OF TIME

From Schnyder’s collaboration with Prof. Dr. Ludwig Oechslin emerged a series of famous astronomical models – The Memorable Trilogy of Time.

Tellerium Johannes Kepler, Astrolabium Galileo Galilei and Planetarium Copernicus – three extraordinary wristwatches that display the positions of the heavenly bodies on the firmament.

Tellerium Johannes Kepler – A revolutionary timepiece which rotates the Earth in its true geographical shape seen from above the North Pole. A flexible spring bends from the Tropic of Cancer to the Tropic of Capricorn to reveal the part of the Earth lit by the Sun and to indicate the time and place of sunrise and sunset. The moon rotates around the Earth. The dragon hand indicates the eclipses of the sun and the moon. The perpetual calendar completes one turn each year. 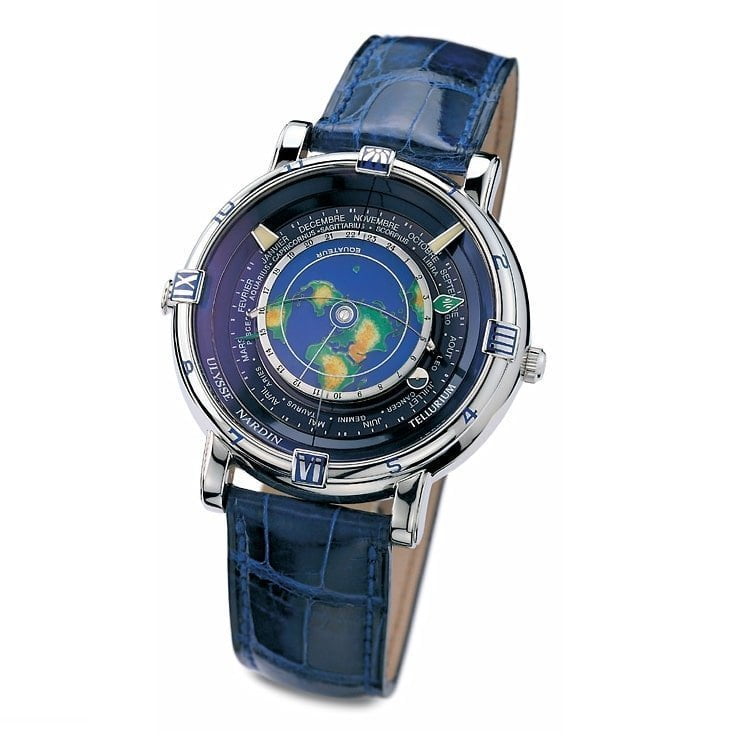 Ulysse Nardin Planetarium Copernicus – brings Ptolemy’s geocentric universe together with Copernicus’ heliocentric universe. Thus, according to Copernicus’ vision of the universe, the sun is placed in the center of the dial and concentric circles flowing out of it. Each circle represents the ancient planets i.e. Mercury, Venus, Earth, and its Moon, Mars, Jupiter, and Saturn. The Earth comes placed in the center of Ptolemy’s universe and possesses numerous lines coming out of it. The Earth position implies the month of the year. Yet the outer ring on the dial represents the particular sun-sign period the Earth is in. The detailing is so precise that The Earth is designed to spin in order to make the revolution of the moon visible. The hour and minutes’ hands in gold against the blue dial make reading time easy and legible.

Astrolabium Galileo Galilei was named by the Guinness Book of Records in 1989 as the world’s most-functional watch (with 21 distinct functions). The Astrolabe – developed by ancient astronomers to measure the altitude and direction of celestial bodies over the horizon, calculate the seasons, the movements of the zodiac and to foretell eclipses. This highly complex instrument indicates the position of the sun, the moon and the stars in the sky at any given hour as seen from Earth. It also indicates sunrise and sunset, dawn and dusk, moon phases, moonrise and moonset, eclipses of sun and moon, the month and the day of the week. 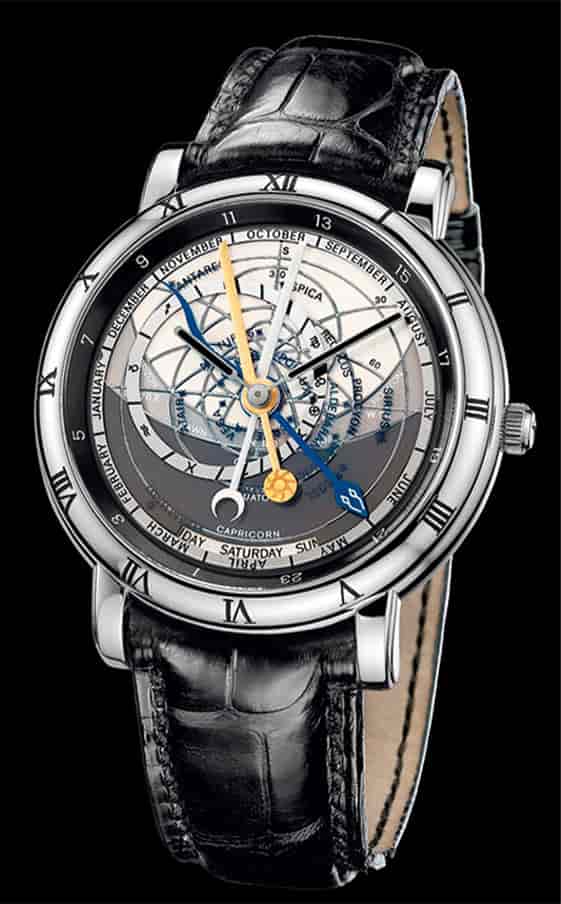 Another milestone for the brand was in 1996 when Ulysse Nardin launched the Perpetual Calendar Ludwig GMT +/- timepiece. 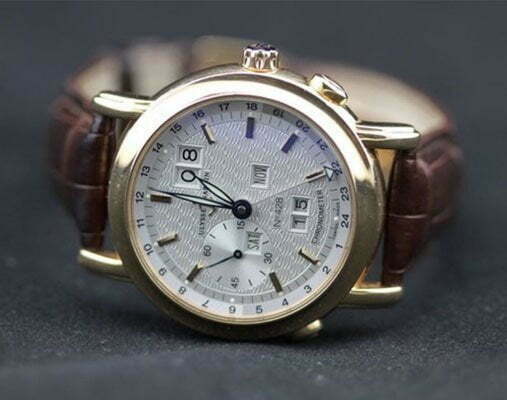 This watch allowed the forward and backward adjustment of all calendar displays over a single crown, eliminating the need to return the watch to the manufacturer in case of setting mistakes. Unlike the standard lever system, the timepiece revealed the very first perpetual calendar mechanism driven by wheels and gears. It was one of the most complicated watches for that time.

Before Prof. Dr. Ludwig Oechslin took his new job as curator of the watch museum in La Chaux-de-Fonds he created another exceptionally and exciting timepiece for Ulysse Nardin – The Freak. Nevertheless, this watch launched in 2001, can be called “a most unusual name for a most unusual watch”. 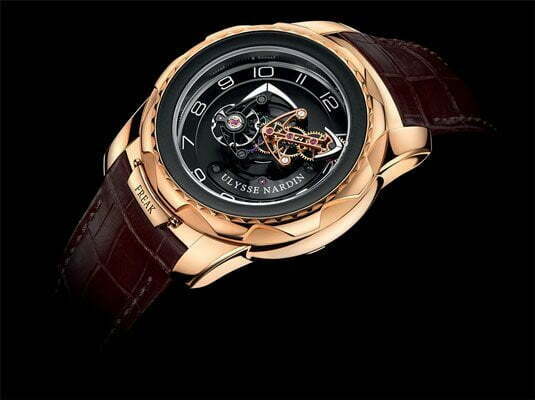 Two plates function as the hour and minute hands, one of them simultaneously forming a carousel tourbillon. Moreover, this watch was also a game changer in the timepieces industry. It introduced for the first time in a watch a material we’re all very familiar: the silicon. As a matter of fact, this non-magnetic, non-lubricated and efficient material definitely changed the industry of watchmaking, and the Freak was the first example of this turning point.

In 2002, Ulysse Nardin Freak – recognized by the 2002 Innovation Prize, Watch of the Year. By this point, Ulysse Nardin already won 4,300 awards, 18 of which are international gold medals. Thus, Ulysse Nardin also registered the greatest number of patents for mechanical watchmaking.

In 2005 Ulysse Nardin launched the Freak 28’800 V/h Diamond Heart with a newly patented escapement – Dual Ulysse. This new escapement is made from diamonds, using a very innovative process. At the same time, they launched the Royal Blue Tourbillon.

Ulysse Nardin launches the UN-160 in 2006 which is the first self-winding base caliber entirely conceived and manufactured in-house.

Rolf Schnyder – the owner and president of the company – dies in 2011. This tragic event marks another turning point for the company. He is succeeded by Patrik P. Hoffman, the current CEO of the company.

Over one year, in 2012, Ulysse Nardin launches a new model – the Marine Chronometer Manufacture – with its unique in-house developed and conceived basis caliber UN-118.

Then in 2015, Ulysse Nardin launches the UlyChoc – a new innovation mechanism in the history of movement evolution.

It has been more than a hundred and sixty years since the birth of the Ulysse Nardin company. During all this time this marvelous company constantly explored the field of horology and astronomy. It is not only innovation that Ulysse Nardin strives on, but also imagination.

Ulysse Nardin, perceived in many circles as the pioneer of functional styling in wristwatches – becomes something most watchmakers often tend to ignore in their quest to register a statement in so-called ‘ultimate’ beauty.

There are companies bigger than Ulysse Nardin, watch manufacturers who make their wristwatches into precision time-telling instruments.

But few could perhaps replicate the sheer passion and joy that goes into the tenets of individual craftsmanship within each wristwatch that comes out of this Swiss stable.

With each individual piece either telling the world of the lost glories and interstellar secrets of Kepler and Galileo. Moreover, these wonderful timepieces represent also the intricacies of the lost art of enameling, or even re-telling the lineage of marine chronometers.

Nevertheless, Ulysse Nardin revels and will always revel its own niche – The niche where time speaks of the individual commitment to the progress of history. And more reveals once more the legacy where each of its wristwatches tells a different story of time.

Marine Collection – Paying tribute to Ulysse Nardin’s rich history with the sea. The timepieces of the Marine collection are the ultimate expression of technical performance and beautiful design.

Diver Collection -A unidirectional rotating bezel and high water resistance. The timepiece from the Diver collection as both a highly reliable diving instrument, and a distinctively elegant sports watch.

Classic Collection – Finding inspiration in artisanal traditions of the past. Combined with cutting-edge watchmaking, the Classic collection includes a wide variety of beautiful styles, and breathtaking complications.

Executive Collection – The contemporary, bold design of watches from the Executive collection makes them instantly recognizable. Their easy-to-use functionality makes them indispensable.

Freak Collection – the Truly Unique and award-winning Freak. Nevertheless known also for its avant-garde design. The Freak – one which stands away with crown, hands and dial, and the first to innovate with silicium escapement components.